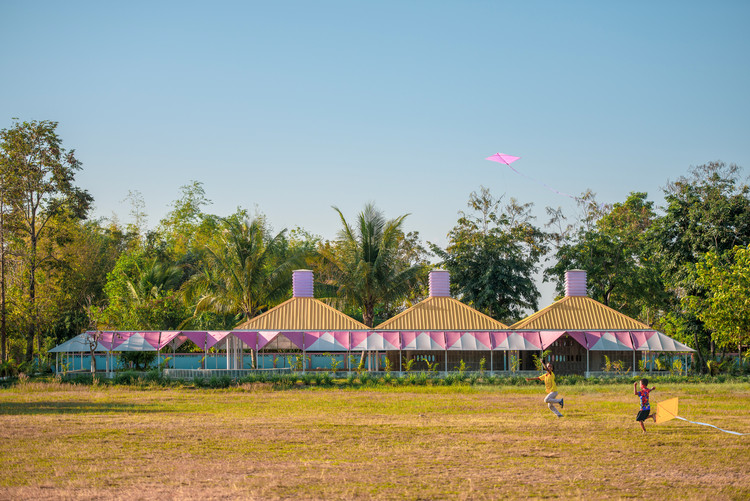 Text description provided by the architects. Design Build for Community is a program co-sponsored by the International Program in Design and Architecture (INDA) at Chulalongkorn University (Bangkok) and Mitsubishi Elevators Thailand. The annual program focuses on providing new communal spaces to underprivileged communities, mainly in rural Thailand. Special attention is given to the design process with community participation.

This year, the tenacity of Dum Yai’s school director, the inventiveness of students and instructors, and the resiliency of workers and villagers led it possible to upgrade the project from a 60 sqm space to a 300 sqm kindergarten. In a 500-people eastern town, surrounded by rice plantations, access to not only proper education but also quality spaces to meet, learn and play was enthusiastically received.

Different mechanisms made that possible:

– Questioning the brief and available resources. Defining educational and recreational needs, redefining the spatial requirements, and expanding the limits from what it’s commonly requested to what is socially rewarding.

– Strategically designing the building as a modular system with the ability to exist as a partial building and grow in the near future when more funds will be available. When finished, the entire program is thought to be hosted under 4 identical roofs, but with the given budget, there was only enough to build two of them. At one of the future rooms, a temporary garden was planted. Finally, as more funds were found, a third roof was able to be built, but not yet the walls of its room.

– Rethinking the constructive techniques and aesthetics, a reinterpretation of the colorful context and everyday mechanisms of extended roof and eaves were seen on vernacular and endemic architecture. Students were to manufacture a colorful, easy-to-assemble awning system that is to increase at 50% the surface of the kindergarten at highly reduced costs. That intermediate space, not considered in the required space for the classroom program, is vital for the social and recreational activities to be held on day to day life of the kindergarten.

– Passive ventilation system through solar chimneys, and taking tropical climate as an advantage that allows blurring the boundaries between interior and exterior.

– On-site inhabitation during the construction by workers and students, fostering an intimate creative environment, promoting social bonding among people of varying classes, generations, and backgrounds.

At Dum Yai, the process became more relevant than the result when city students, international instructors, village kids, and rural workers shared and learned from each other while working side by side.