Beersheba: Brutalist Architecture in the Middle of the Desert

Beersheba: Brutalist Architecture in the Middle of the Desert 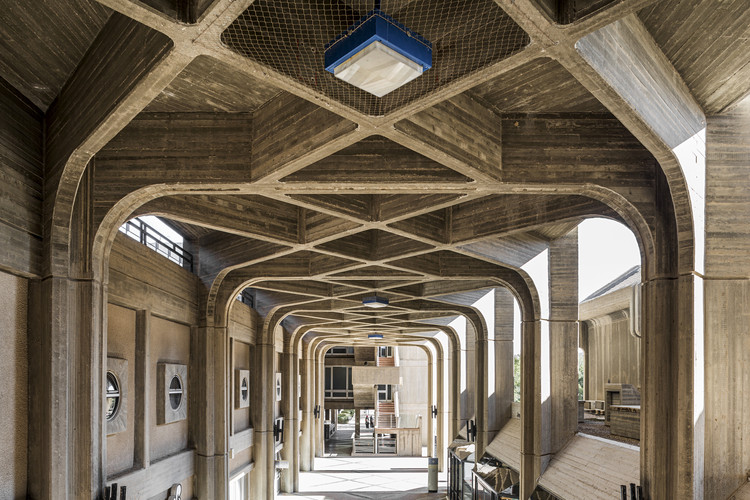 Located 108 kilometers to the south of Tel Aviv, Beersheba (Be’er Sheva) is one of Israel’s oldest cities. Although in existence since biblical times, military campaigns and occupations have seen it destroyed and rebuilt throughout the centuries, resulting in the juxtaposition of various time periods and cultures that can be seen throughout the city. One of Beersheba’s principal transformations happened during the population boom of the 1950s sparked by the formation of the State of Israel in 1948. To keep up with the need for housing, the government rebuilt and expanded the city, which soon transformed from a small military outpost of 4,000 people to a vibrant urban center in the middle of the Negev Desert.

Beersheba, much like other Israeli cities became an open-air laboratory for architecture; a place where architects, inspired by the modernism of Le Corbusier, could experiment with new ways of urban living.

Following the establishment of the State of Israel in 1948, architect Arieh Sharon was named Director of the National Council and put in charge of the team that would formulate the blue prints for the new city. His time at the Bauhaus and as an apprentice under Walter Gropius and Hannes Meyer–working for the latter between 1929 and 1931- would shape his Rationalist and Modernist approach to designing the fledgling city. Inspired by England’s new towns, Sharon aimed to design modern urban environments for the thousands of incoming Jewish immigrants settling in the country. At the time, new arrivals found themselves concentrated in the few urban centers present in the country at the time. The government’s aim was to distribute them evenly throughout the country by developing new cities within the territory. Israel saw its population triple between 1948 and 1961 and, between 1948 and 1957, the plans for 28 new cities were laid down. Among these, Beersheba and Ashdod stood out.

To facilitate the construction of multiple buildings, the government opted for the latest building technology that would allow a quick and cost effective construction process on a mass scale. A key element was the use of enforced concrete as the primary building material, which allowed for the creation of multiple buildings–everything from residential to administrative, to educational, to cultural, and even entertainment–in a short amount of time. This choice of materials led many of the buildings to adopt a Brutalist style, noted for their drastic shapes and material rawness.

For the past few years, Stefano Perego has worked to document the architectural works that contribute to Beersheba’s Brutalist legacy and to pay tribute to the architects who, inspired by the events of the time and driven by technological progress, brought them to fruition. In this article, we highlight some of Beersheba’s brutalist works of architecture as seen in the photography of Stefano Perego:

Monument to the Negev Brigade

Zalman Aranne Library at Ben-Gurion University of the Negev

Stefano Perego (1984) is an architectural photographer based in Milan, Italy. He collaborates frequently with architectural studios as well as artists and is the co-author of the book SOVIET ASIA (Modern Soviet Architecture of Central Asia). His interest in architecture of the second half of the 20th century has been the focal point of his photography capturing Modernist, Brutalist, and Postmodernist works.