One of Frank Lloyd Wright’s Unpublished Projects Revealed to the Public: the Arizona State Capitol

One of Frank Lloyd Wright’s Unpublished Projects Revealed to the Public: the Arizona State Capitol

The Frank Lloyd Wright Foundation has uncovered the Arizona State Capitol project, a never seen before unbuilt proposal by Wright. An “oasis of democracy in the Sonoran Desert”, the intervention revealed in the latest issue of The Frank Lloyd Wright Quarterly, has been digitally remodeled, with photorealistic visualizations by David Romero. 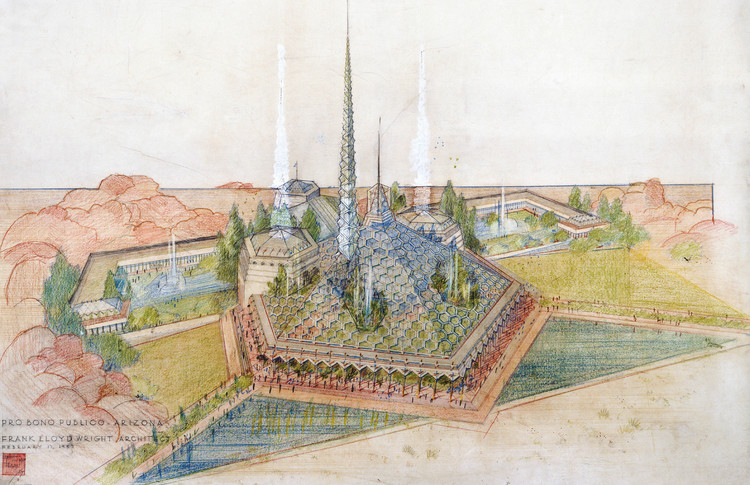 The radical design had a whole controversy around it, according to the article written by Rebecca Rhoades in The Frank Lloyd Wright Quarterly. “What could be more ridiculous than for Arizona to go on record before the world and our own descendants as having rejected Frank Lloyd Wright as an architect?” stated one local resident in a letter to the editor of the Phoenix Gazette. In fact, in 1957, Wright’s proposal for the city of Phoenix created a debate among the citizens and never made it off plans. Some called it an oriental brothel, while others thought it was too expensive to be built.

An Oasis, as per Wright’s description, the design is a one-story shelter, inspired by Alhambra, the grand 14th-century fortress of Moorish kings in Granada, Spain. At the time, Wright stated that “in all my efforts, I have never done anything for the people whose community I have enjoyed for 25 years. I want to do something about that.” Hoping to do a project for the benefit of the people, Wright imagined lush botanical gardens under a 400-foot-wide lacy dome of reinforced perforated concrete plated in blue oxidized copper.

Merging the architecture with the landscape, the proposal also puts in place a central gazebo-like hall, where the works of by Arizonian artists would be displayed. The initial design featured two spires, for radio and TV, changed later into a single tower element. Located in Papago Park, 10 miles from downtown Phoenix, the park offered the open spaces and the background that Wright imagined for his design.

News Via the Member-Exclusive Magazine.

Using technology to recreate the bank branch at home