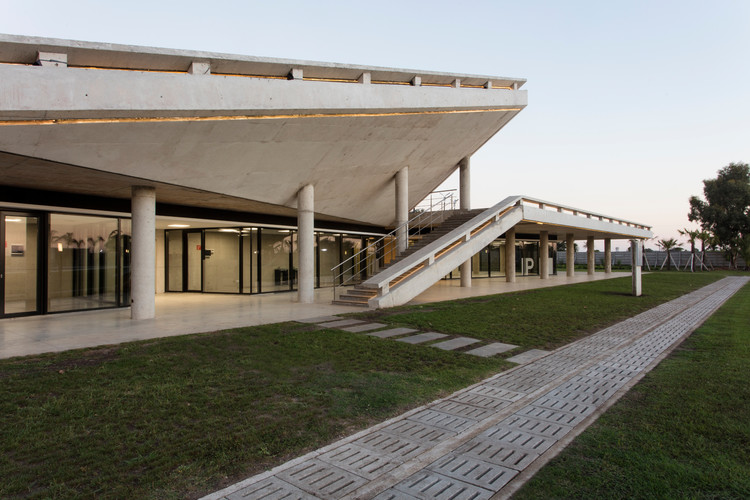 Text description provided by the architects. The Santa Clara Park is located on a nine-hectare site in the Partido de Mar Chiquita, seven hundred meters from the sea. The assignment is to provide the park with a service infrastructure for the recreational and sports sectors. A pavilion was conceived as a single volume containing all the functions required by the program, fusing building and park in a topographical way. It is proposed to recover the land built on a walkable roof that becomes part of the landscape. The entire project is reduced to a large open explanation, which continues free movement throughout the park; and a lower plane that is permeable and accessible throughout its perimeter and from the terrace.

This explains how it behaves like a large “balcony” or “tribune” towards the sports area, as well as being very useful for conducting outdoor events. The grass slopes, the ramps and the steps, the specific movements of the stay and the route, the requirements of a diverse and playful appropriation of the different spaces, revaluing the site and the landscape. The lower floor is organized from a strict grid where both the columns and the concrete partitions that make up the most private rooms, corresponding to the changing rooms, toilets, kitchens and warehouses, are inscribed. These precincts are flanked by a series of oblique glazed planes that help to consolidate the program (multipurpose room, market, gym, infirmary, etc.) in a very flexible way; at the same time that they promote movement and give dynamism to the different circulation spaces. The search for a continuous and fluid spatiality was raised as an exaltation of an experience originated during an irregular journey that generates ever-changing perspectives, and a transition relationship where the limits between interior and exterior are diluted.

Verify a series of slits, perforations, cuts and folds in different sectors of the structure, which need to illuminate the spaces in a central and natural way, in addition to characterizing accesses and facilitating vertical communication systems. Reinforced concrete is used as a fundamental component in the materiality of the project, due to its durability and resistance in the exhibition of intensive uses. The structure is the architecture, the pavilion is an organism composed of a large reinforced concrete slab, partitions, columns, ramps and stairs, where the location and shape of these elements is the consequence of a series of forces that act like other , in a dynamic overlap of the site with the requirements of the program.