PRESQUE ISLE — It all started with curiosity.

It was curiosity that took Mike Westfall from humble beginnings in Montrose to deep in the heart of one of the most important chapters of Michigan’s history, where he squared off with Michael Moore, was name-dropped by Phil Donahue, and was publicly thanked by Ralph Nader.

Today, Westfall, 74, lives the quiet life along Lake Huron’s shore at the end of Grand Lake Road in Presque Isle.

But, in the 1970s, 80s, and into the 90s, Westfall was loud, a learned agitator pushing both corporate and union leaders to protect workers in the face of automation, downsizing, and outsourcing.

And it all started because he was curious.

‘WE HAD NO CREDENTIALS’

Westfall came from a poor family.

His grandpa couldn’t read or write, “worked in a dump and lived in a dump,” Westfall recalled recently at his home. “Thought the world of him. But I never wanted to be poor.”

In 1964, Westfall landed a job fresh out of high school with General Motors’ Truck and Bus Group, Flint Assembly Plant. It was a good-paying job protected by the United Auto Workers, but, by the 1970s, Westfall’s curiosity had him studying then-emerging research on manufacturing automation, which GM, Ford, and Chrysler were exploring as a way to cut costs in the face of new competition from Japanese manufacturers. 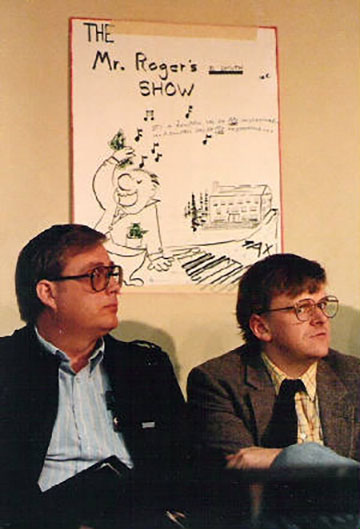 He put together a group of nine workers who continued to study not just automation, but also corporate consolidation and outsourcing.

“We had no credentials,” Westfall said. “When you’re working on an assembly line, what credentials do you have? I was just a truck driver.”

Nonetheless, the group — which eventually came to be known as the Westfall Awareness Committee — started doing seminars in union halls, advocating for better worker protections.

“What I was telling them is that automation is really going to knock us down,” Westfall said. “And, pretty soon, nine people turned into dozens.”

‘THEY CALLED US “THE ANTIS”‘ 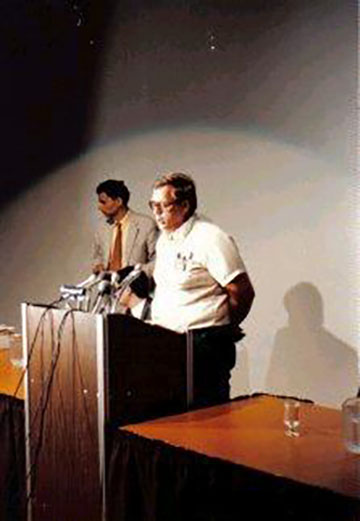 Courtesy Photo
Mike Westfall, left, addresses the press at the University of Michigan in 1985 with Ralph Nader.

As his group gained notoriety, Westfall said, he was interviewed on radio and television, asked to speak at universities.

“I don’t like to speak in public,” he said. “All the things I didn’t like to do, I was doing, because nobody else knew how to do it.”

He was offered a job at Solidarity House, the UAW’s headquarters in Detroit. It would’ve meant a pay raise and a second pension, but Westfall said he turned it down, because he wasn’t in it for the money.

There were two caucuses in the UAW: the administrative caucus and a faction called “the Reuther caucus,” more closely aligned with the pro-worker vision of the union-pioneering Reuther family.

“I belonged to the Reuther caucus,” Westfall said. “They called us ‘the antis.’ I’m not a person who gets along with everybody. I’m diplomatic, I’ll get along with who I can. But, if it’s wrong, it’s wrong.” 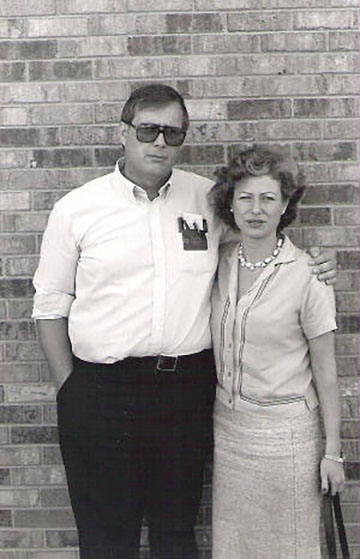 Around the same time Westfall’s group was coming up, a lawyer from Connecticut named Ralph Nader was getting famous for his crusades for car safety, consumer protections, and corporate accountability. Nader caught wind of Westfall’s work and aligned himself with Westfall’s new program, known as CERP, or Cost of living adjustments for retirees, Early Retirement, and Paid personal holidays.

Nader would join Westfall, by then chairman of the United Autoworkers Local 598 25 and Out Committee, at speeches and forums and union halls and on TV and radio. Nader, who would eventually become one of the few serious third-party presidential contenders, publicly thanked Westfall in the introduction to his 1986 book written with William Taylor, “The Big Boys,” and credited Westfall’s foresight on automation in a 1981 essay called “Robots Coming Fast.”

‘THIS IS NOT CLASSY, MIKE’

By the mid-1980s, when GM’s corporate restructuring was threatening thousands of jobs in Flint and elsewhere, Westfall and Nader started pitching an idea for a movie with filmmaker Nina Rosenblum.

Also in the mix at the time was a young activist named Roger Moore. 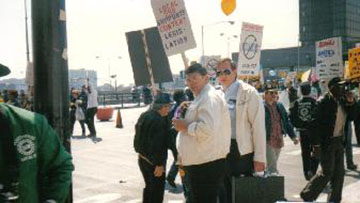 Nader, Westfall, and their compatriots helped Moore put together the documentary that would eventually become “Roger & Me,” which launched Moore to stardom as a champion of the progressive left and made Flint’s demise part of the national lore.

But the film also left out the work of Westfall and other UAW organizers and, according to Nader, Westfall, and several others involved in Flint activism at the time, omitted key truths that made for a dramatic but often inaccurate movie.

In a 2007 book, “Citizen Moore,” journalist and screenwriter Roger Rapoport transcribes a TV segment talk show host Phil Donahue taped in Flint in 1990. Donahue, according to Rapoport’s transcript, slammed Moore for failing to credit Westfall and others with the genesis of the film and omitting them from the final product.

“Interviews were done with people in the union … real solid citizen types doing in-the-trench work,” Donahue told Moore, according to the book. “And those people suddenly disappeared from the film … This is not classy, Mike.”

That was 30 years ago, and Westfall still harbors ill feelings toward Moore, whom Westfall called “an ambulance chaser who tried to make a career” out of the movement.

“The truth’s not in the guy,” Westfall said.

In contrast, Westfall credits the success of his work — culminating in a major rally in Flint in 1987 marking the 50th anniversary of the UAW and Westfall’s authorship in the late-80s of a new retirement program benefitting thousands of workers — to humility and veritas.

“I didn’t know which way was up,” Westfall said of his time as a union organizer, “other than the fact, like I told my people: ‘Know more than the rest of them know. Cause above self. And truth. Always tell the truth.’”

‘I WAS RIGHT … UNFORTUNATELY’

Today, Westfall can only look at his once-precious union and shake his head at the thousands and thousands of layoffs and at the federal probes into corruption at Solidarity House

Unions “were very effective back then,” he added, “because they put the cause above themselves. Today, it’s themselves above the cause.”

He has three children, all of them doctors, and lives in a big house with Lake Huron lapping at its feet.

He still shows up in books and articles, now and then, like a 2007 L.A. Times story on Moore and a Flint Journal piece in 2009 on the city’s struggles.

All of Westfall’s papers from union days are now stored at the University of Michigan-Flint and at Cornell University.

And he’s turned his activist heart, in recent years, to fighting against the expansion of gay rights, which he views as an infringement on religious liberty, joining the American Family Association of Michigan led by former state rep Gary Glenn.

“I have to figure out what direction I’m going to go in,” Westfall said. “And, to me, it’s faith.”

Courtesy Photo
Mike Westfall, left, addresses the press at the University of Michigan in 1985 with Ralph Nader.

Courtesy Photo
Mike Westfall is interviewed in the 1980s.

Courtesy Photos
Mike Westfall poses outside of a General Motors plant in 1984.

News Photo by Justin A. Hinkley
Mike Westfall poses recently in his Presque Isle home with some of the books in which he’s been featured. 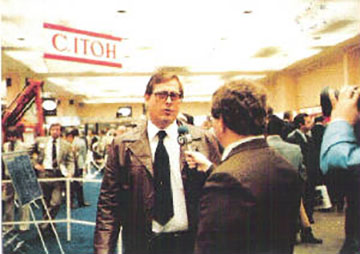 Courtesy Photo
Mike Westfall is interviewed in the 1980s. 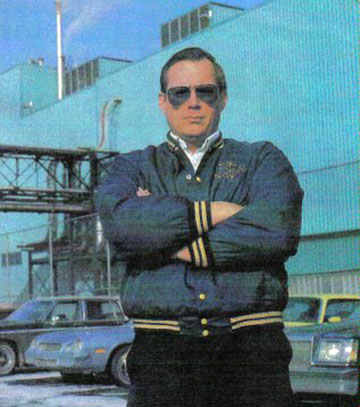 Courtesy Photos
Mike Westfall poses outside of a General Motors plant in 1984. 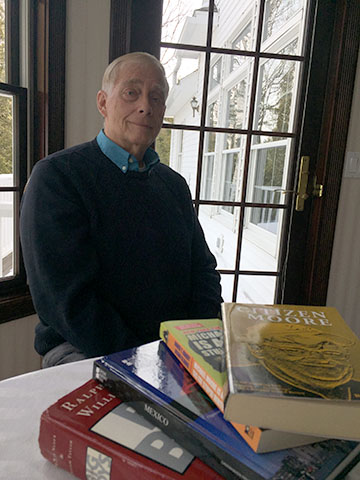 News Photo by Justin A. Hinkley
Mike Westfall poses recently in his Presque Isle home with some of the books in which he’s been featured. 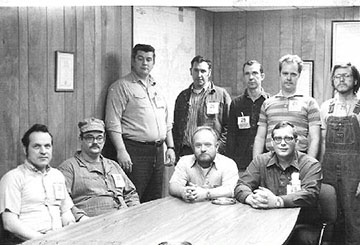 
Today’s breaking news and more in your inbox


“Vanity keeps persons in favor of themselves who are not in favor with another.” — William Shakespeare.

Google News
https://news.google.com
Google News is a news aggregator and app developed by Google. It presents a continuous, customizable flow of articles organized from thousands of publishers and magazines. Google News is available on Android, iOS, and the web. A beta version was launched in September 2002 and released officially in January 2006.

Smart assistants like Google Assistant, Amazon's Alexa, and Apple's Siri are getting better and ... better. But they still...